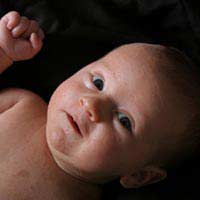 Cute little newborns don’t always look as adorable as they really are, all because of baby acne. In fact, many newborns – particularly those who are breast-fed – have unsightly red pimples or little whiteheads scattered across their cheeks.

Often referred to as a milk rash, these pimples are actually completely harmless, and will go away on by themselves in time. They are thought to be the result of the hormones infants receive from their mums during pregnancy, although nobody knows with 100 percent accuracy why they appear.

These foetal hormones, such as adrenal androgens, are passed to your baby before your baby is born through the placenta. For some reason, baby boys are more likely to develop baby acne than girls, and some researchers say that severe childhood acne could be a prediction of bad teenage acne.

While nobody can pinpoint the exact cause of baby acne, certain triggers have been attributed to its presence. If you take certain medications while breast-feeding, such as steroids, or if your baby takes them, it may increase the chance of their developing baby acne. Some oral contraceptives taken by a breast-feeding mum can also cause baby acne.

Don’t be dismayed if your child has acne. The pimples appear usually like a rash, splashed across the cheeks and sometimes on the forehead and chin. They usually clear up within a few weeks, although sometimes they might last longer. But they always disappear.

It’s important to resist the urge to “clean them off” your baby’s face, as touching them or trying to cleanse them will only make them worse.

Leave them alone, and they’ll go away – and never use over-the-counter acne medication on a baby! Relax and go with the flow, and before you know it the acne will be nothing more than a less than lovely photograph in your baby album.

Other skin conditions (which are not acne) that are common to babies are:

Baby acne is very common, even though you may feel like you’re the only new mum with an infant covered in red pimples! It does pass, and the key is to just be patient and keep it clean, and resist the urge to put anything on it.

Baby acne is often most visible if your baby is hot and irritable, as during that time the blood flow is increased. Keeping your baby pleasantly cool, and keeping your cool as well, is the best way to deal with this condition - which is always more distressing for the parent!

Should Babies Use Soap?