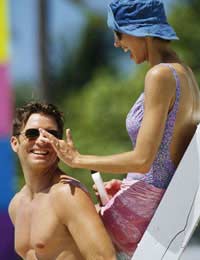 Although the act of tanning in order to achieve a golden glow is deemed by most cultures as a way to promote the look of healthy skin this act can actually be damaging to your skin. Spending time in the sun and exposing your skin to UV rays can lead to sunburns, however you do not have to actually suffer from a burn to destroy skin cells.

Sun exposure, especially the exposure to UV radiation, causes damage to skin cells and the DNA of the skin. When this damage occurs some cells are able to repair themselves but other cells die. Repeated burning can lead to long lasting damage. The most common long lasting effects of sunburn are the development of skin cancer, immune system suppression, and premature ageing.

Melanoma, also called skin cancer, is one of the fastest growing types of cancer in the world. More people suffer from skin cancer today compared with just ten years ago. The rising occurrence of this serious cancer is in part attributed to repeated sunburns, especially those that occur in early childhood.

Repeated exposure to sun or the suffering of just one severe sunburn can increase your likelihood of developing skin cancer. The three most prevalent types of skin cancer to watch for are basal cell carcinoma, squamous cell carcinoma, and malignant melanoma.

Malignant melanoma is a type of skin cancer that begins in or near a mole. Known as the deadliest form of skin cancer, this condition needs immediate treatment from a doctor so everyone with a history of sun exposure is urged to check his or her skin regularly for signs of the disease.

Although skin cancer is the most serious long lasting effect from sunburn, repeated burning and long-term sun exposure can also lead to other types of permanent damage. Sunburns can lead to changes in the skin and result in skin growths called actinic keratoses. These growths are normally non-cancerous, but if left untreated they can become malignant.

Finally, premature ageing is caused by repeated sun exposure and the occurrence of sunburns. The long lasting effects are seen in the appearance of wrinkles, dark spots on the skin, and skin sagging.

The best way to avoid suffering from the long lasting effects of sunburn is to avoid getting a sunburn altogether. Prevent sunburn by applying an SPF sunscreen with a rating of at least 15 everyday, even if it is cloudy outside. You should also wear sun protective clothing, like long sleeved shirts and hats, whenever possible. By limiting the amount of skin that is exposed to UV rays you can reduce your chances of getting sunburned. Finally, you should limit the time that you spend outside, especially during the peak sunlight hours of the afternoon, and avoid tanning or laying out in the sun for sport.

By taking a few preventive steps now you can greatly reduce your chances of suffering from sunburn induced problems later.

Sun Protection For Your Skin

On The Spot Remedies for Sunburn

Tanning and Sunbed Damage: What Happens to Your Skin
Share Your Story, Join the Discussion or Seek Advice..
I have never been badly sunburnt befor. However 3 weeks ago i got caught out in about 22 degrees and 3 1/2 hours exposure I got severely burnt. I am now worried about the lasting effects to my skin and want to know if I should seek medical advice. My skin has all peeled as expected but I am still very pink as much as my skin doesn't hurt to touch it looks very sensitive. Any advice would be appriciated
Jen - 6-Jun-17 @ 11:41 PM
Title:
(never shown)
Firstname:
(never shown)
Surname:
(never shown)
Email:
(never shown)
Nickname:
(shown)
Comment:
Validate: