Home > Other Skin Problems > All About Lichen Planus

All About Lichen Planus 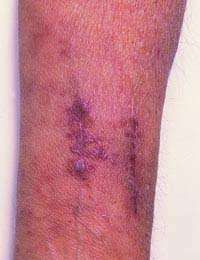 The problem with skin rashes is that it often can be difficult to differentiate one rash from another. Making a correct diagnosis, however, is vital to getting the right treatment.

Lichen planus, known as LP, is one fairly common rash which often mimics other rashes. It appears usually in people aged between 30 and 60, although it can affect younger and older people as well, albeit rarely. It is estimated to affect about one in 50 of us – women more often than men, in oral cases – and is non-infectious.

Lichen Planus of the Skin

Lichen planus of the skin results in small, purplish bumps which are usually flat. The rash can show up anywhere on the body, but common places are the wrists and the backs of the knees. Sometimes the bumps can have a white kind of lacy appearance; this is called Wickham’s Striae.

Unfortunately, the rash will not usually be content with staying in one place, which is why it can make life so miserable for people who have it. Other common areas for it to show up are the lower back, the neck and the genitals – both the penis and the vagina. In rare cases, the hair and nails are often affected.

Treatment usually involves the use of steroid creams, accompanied by antihistamines if the rash is accompanied by itching. Rarely blisters will form, which will need additional treatment. But usually skin LP will disappear on its own accord, although a second flare-up is not uncommon.

Oral lichen planus appears in the mouth, as the name suggests, usually forming small white patches in the lining of the mouth, along the teeth, tongue and gums.

Occasionally the white spots tend to get red or to even blister, which can cause discomfort; when this happens some people find it hard to eat spicy foods or foods that are very hot.

To diagnose oral LP, often a biopsy is necessary, taking a small patch of skin from the roof of the mouth and sending it off to a lab. This is done because the symptoms can mimic other illnesses: white spots in the mouth, for example, can be a sign of oral cancer.

Steroid creams are often used to treat oral LP and occasionally immune-suppressants are used as well. Keep in mind that unlike skin LP, however, oral LP will never well and truly disappear, although treatment can make the pain tolerable. There is a good chance it will flare up again from time to time, however, no matter how comprehensive the treatment is.

It is important to make a correct diagnosis of oral LP as oral cancer has been known to develop in anywhere from one to three per cent of cases that have been left completely untreated for a long period of time.

Links to Other Illnesses

LP also is known to appear amongst people who suffer from various liver conditions, such as hepatitis. Stress can also play a role in whether or not you develop it, although the reason for this is not known.

Known as an inflammatory disease, both medical doctors as well as dermatologists are unclear about the exact cause of LP. It is thought to be an auto-immune condition, which can, as mentioned, sometimes be made worse by stress.

In some cases, LP is sparked or affected by the use of certain medications, such as those for arthritis, high blood pressure and heart disease. If this is identified as the cause, then stopping taking the medication often can make the condition resolve itself within just a few weeks.

Both oral and skin LP are not a lot of fun, but usually topical treatment can keep the condition under control until it goes away on its own accord. With oral LP the condition will never disappear completely, but once you have a correct diagnosis it will be easier to get the right treatment and keep it under control.

All About Herpes
Share Your Story, Join the Discussion or Seek Advice..
I am 73 and diabetic.I was diagonized with lichen planus. It appeared on on forearms, neck and lower back. I have been given antibiotics called Methozol. There is an improvement in the condition. I was asked by the dermatologist to do a photolamp teatment over 21 periods. The price was echorbitant. (R9 000) for the course. This dermatologist does not have a photo lamp cubicle. He wanted me to pay for standing in front of a man height equipment. I decided to purchase my own UVB equipment for 1/3 the price. I am waiting delivery. I can do the treatment at home and also save R1 700 in fuel.
Victor Moodley - 10-Apr-18 @ 2:08 PM
Title:
(never shown)
Firstname:
(never shown)
Surname:
(never shown)
Email:
(never shown)
Nickname:
(shown)
Comment:
Validate: