Home > Case Studies > How I Cured My Blepharitis: A Case Study

How I Cured My Blepharitis: A Case Study 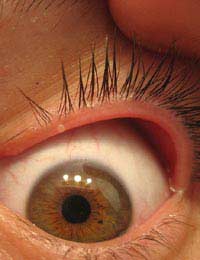 When systems programmer Duncan Snow began to get itchy eyes from time to time, initially he ignored it. As he suffered from a severe dust mite allergy, he assumed that it was all part of that.

But when Duncan’s eyes began to itch all the time and his eyes began looking quite red, he decided to see his GP. “I kept getting what I thought was pinkeye from time to time and itchy eyes generally, so I went to the doctor,” says Duncan, 49, who lives in London.

“The doctor asked me if I had slightly sort of scaly bits of skin around the eyes. I said yes, so she diagnosed it as blepharitis.”

Blepharitis is a chronic condition characterized by a general inflammation of the eyelid. People with this condition often get very itchy eyes and what looks like dandruff, or tiny flakes of skin, coming down from their eyelids, which may appear to be quite red and scaly.

The condition is caused by an inability of the oil-producing glands to produce enough oil when tears are made. Different types of treatments are available, but they all depend on the severity of the condition.

Blepharitis can last for weeks or even years, and for unlucky people, treatments just make the condition even worse, as they impair the oil glands even more. It is more common in people when they get older, particularly if they have dry skin or eczema in general.

“My doctor advised me to clean my eyes morning and night using cotton wool and baby shampoo, which I did for about a month,” Duncan says.

“Basically, she told me that blepharitis was possibly a chronic condition, due no doubt to a lack of eye hygiene. That means there is no sort of cure for it, but if you wash your eyes properly the problem should go away.

“That is what did happen to me, actually. It helped that I also used a hot flannel every morning on my eyes before washing them for five minutes, every day for about a month, at the doctor's suggestion. And after a while, all the itchiness, redness and inflammation went away.”

Duncan was told that there are other more invasive techniques to wash eyes affected by blepharitis, which his doctor did not prescribe for him as his condition was considered pretty mild. “It did not affect the whole eyelid, it was just in the corners where the eye meets the side of the nose. But it was still very itchy,” he says.

If the condition is moderate, sometimes antibiotic or steroid cream is advised as well as washing. In severe cases, surgery on the eyelid may be necessary.

Duncan’s morning routine has now changed to include regular eye hygiene, to keep his blepharitis at bay. “I now just make sure that when I am washing my hair that I take a little bit of the shampoo and wash my eyes,” he says.

“Everyone washes their face but I wasn’t making a concerted effort to wash the corners of my eyes at all. Now that I have started to do that regularly, it seems to have solved the problem.

“If it does get itchy at all, I reintroduce the system of washing my eyes in the morning with baby shampoo and cotton wool buds, until it goes away again. But on the whole, it does seems to have ceased overall.”

Doctors Thought My Wart Could Be Skin Cancer: Case Study
Share Your Story, Join the Discussion or Seek Advice..
Itâ€™s a crazy miracle product.. [â€¦] Thanks for curing me from herpes..____________________R*o*b*i*n*s*o*n*b*u*c*k*l*e*r [*y*a*h*o*o* c*o*m*]].....
Suzannah Weiss - 8-Jul-22 @ 10:59 PM
I have been experiencing the same thing. I used the antibiotic cream for over a week and it seemed to help but didn’t clear it up completely. Now, my eyes have Claire’s right up again! I have been washing my life with baby shampoo morning and night, and still this morning I woke up to swollen red lids and red eyes that are itchy as hell. I work I health care and the lighting of the hospital irritates my eyes greatly. By the end of a 12 hour shift they are very red and sore. I don’t know what to do, back to MY GP I’m guessing...
Island girl - 12-Jul-18 @ 3:59 PM
Iv been suffering with blepheritis for about 8 months now, my gp has given me antibiotic eyedrops to try on top of my Daily routine of a hot compress morning and night and eye cleansing wipes. Before this I had tried every natural home remedy. But nothing worked and only seemed to make it much worse. I get a gooey discharge from my eye and they can become very bloodshot and sore almost on a weekly basis. Iv been using the antibiotic eyedrops for just over a week now and I noticed a difference in the first day or two but now my eyes seem to be getting bad again. I don’t know what else to try.
Tash - 1-Jul-18 @ 10:02 PM
Title:
(never shown)
Firstname:
(never shown)
Surname:
(never shown)
Email:
(never shown)
Nickname:
(shown)
Comment:
Validate: