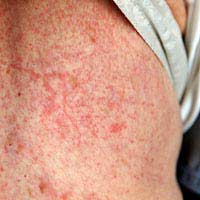 The vast majority of skin rashes developed by either children or adults are not life-threatening, simply annoying. We might get itchy after changing washing powders, for example, or break out in hives after eating something we weren’t aware that we were allergic to, such as pine nuts or kiwi fruit.

Sometimes, we get a rash as the result of a minor virus, or because we are bitten by something that makes us break out in small blisters or bumps. Usually, an antihistamine and a dab of anti-itch cream is all that’s needed to make us feel as right as rain again.

But in some cases, a skin rash can be a symptom of more than an allergy or insensitivity to something. While it can be incredibly rare to develop a skin rash that could be life-threatening, if this does happen to you or your children, knowing what to do could save a life.

Life-threatening skin rashes share one or more of these distinguishing features:

Here are the top five life-threatening skin rashes, in alphabetical order: Please note that bacterial meningitis, which can also be fatal, is sometimes accompanied by a skin rash as well, but this isn't always the case. Sometimes the rash is not visible, and in people with very dark skin it can be hard to see at all.

When in Doubt, Act

Life-threatening skin rashes are rare, but you need to know how to deal with one should the worst happen. When in doubt, see your GP immediately, or visit your local A&E if your doctor is not readily available.

Most skin rashes are nothing more than a minor irritation, but they can, in rare cases, be indicative of something more sinister. Don’t leave your health, or your family’s health, up to chance - take action quickly if you see any skin rash that could be cause for concern.