Home > Other Skin Problems > Impetigo And Your SKin

Impetigo And Your SKin 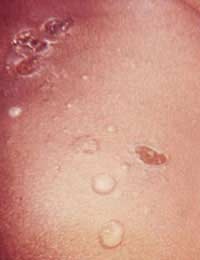 Impetigo is an extremely common skin condition that resembles poison ivy in its infectiousness itchiness, and appearance. The main difference between impetigo and other types of infectious rashes is that there doesn't have to be any allergy present for a person to come down the condition. Commonly referred to as "infantigo," (most likely because it is mainly contracted by and associated with children) it is easily caught and easily spread, especially among members living in the same household.

The Causes of Impetigo

There are two main types of bacteria that can cause impetigo: Group A streptococci bacteria and Staphylococcus aureus. While other types of bacteria can cause an impetigo infection, one of these two causes is almost always the culprit. These bacteria often are found on the surface of the skin, and any time there is a cut, insect bite, or other open wound on the skin, the bacteria can enter and cause infection. Because the bacteria can easily enter into any open wound, no matter how small, many people who develop impetigo will not even realise they had an injury that could have sparked the illness. This is also the reason that the condition is found more readily in children. Children are known for playing roughly and ignoring small to microscopic injuries that occur during particularly spirited times of play.

Heat and humidity spread the growth of bacteria more quickly than in cool temperatures, so the warm summer months are the most common time for impetigo to occur. Since impetigo is so contagious, it is possible for one to contract the illness by touching the outbreak on an infected person, or even by using the same towel or bed sheets. This is why prevention is key to preventing the spreading of the illness (see below for tips on prevention of impetigo).

The Symptoms of Impetigo

Typically, the very first symptom of impetigo will be small blisters on the skin. These are often so tiny that they are mistaken for small bug bites, and they often will appear nowhere near the original site of infection. In some cases, however, this first symptom will appear as tiny red bumps. Either way, these will typically rupture within 24 hours of appearance (possibly sooner) and the blisters will usually leak a clear pus or fluid. Then this pus will often touch other parts of the skin and cause a cluster of itchy red bumps (very similar in appearance to poison ivy) and over a period of less than a week, there will be thick crusts forming on top of any areas the lesions have spread to. These lesions will itch terribly, but scratching can lead to the spread of the infection to other parts of the body. Sometimes, in severe cases, the area of severe infections can be very swollen and painful.

If the symptoms are recognised early and the infection is still in its early stages, impetigo can be treated with topical antibiotic creams. If the area is kept clean using antibacterial soap and treated several times a day with antibiotic creams, it is possible to prevent the spread of the illness to other parts of the body. If, however, the infection has been allowed to progress and more areas of the skin appear to be infected, a trip to the doctor will be needed for a formal diagnosis and more aggressive treatment. Once the doctor is able to determine which type of bacteria caused the infection he can then prescribe the correct oral antibiotics and usually a prescription strength antibacterial cream for topical treatment that will help control the spread of the infection until the oral medications kick in.

The actual infected areas will need to be kept clean during treatment, and for severe itching any type of anti-itch cream will help. Not only will this ease discomfort for the sufferer, but it will also help prevent the spread of impetigo to other parts of the body. Keeping any infected areas covered with gauze is also a good idea to prevent scratching and spreading. Once a person has begun taking antibiotics, he or she will no longer be contagious after 48 hours, and the lesions should be gone within a week or so.

How to Prevent Impetigo

While impetigo cannot always be prevented, especially in children, there are some steps you can take to ward off the illness or to keep it from spreading to an entire family once a person has contracted it. Since impetigo is caused by the spread of bacteria into an open wound, it is important to make sure that any scratches, cuts, scrapes or insect bites are kept clean and covered at all times. This is particularly true if children will be playing outside and getting dirty and sweaty. Any itchy insect bites should be treated with anti-itch medication and covered with a bandage because scratching a bug bite with dirty fingers is often a cause of impetigo in children.

If any of the first signs of impetigo occur, you should cover those with band-aids and keep the areas, as well as the hands, as clean as possible at all times. Treatment with an antibiotic cream can help prevent severe infections. If someone in your household has impetigo, you will want to take precautions to prevent it from spreading to the entire household. You can do this by keeping all infected areas covered, keeping other children away from the infected person as much as possible, and not allowing anyone to share a bed, blanket or towels with the infected person. While this doesn't always work to keep others from contracting the illness, it will definitely decrease the chances of spreading the infection.

Impetigo is a very common illness. While you can't always prevent the occurrence of this infection, knowing what it is, how to treat it, and what the symptoms are can help you deal with it if it does infect your family.

All About Lichen Planus
Share Your Story, Join the Discussion or Seek Advice..
I work with autistic and challenging behaviour young adults, and we have one who keeps getting impetigo on quite a regular basis,you cant really explain to the individual not to itch,and this causes him severe distress,we obviously have a routine for washing of clothes/bedlinen etc, is there anything else we can do? as normally at bath times seems to cause him even more anxiety, would hot water cause the discomfort when sweating, as he can not tell us as is non verbal, anything to help his discomfort would be a benefit. thanks
Richard George Taylo - 6-Dec-11 @ 10:11 AM
Title:
(never shown)
Firstname:
(never shown)
Surname:
(never shown)
Email:
(never shown)
Nickname:
(shown)
Comment:
Validate: