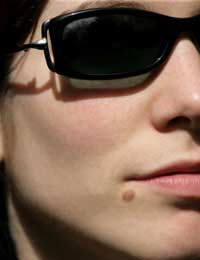 Almost everyone walking the face of the earth has at least one mole on his or her skin. Most people never really pay attention to these dark spots; however, knowing a bit about skin moles can mean the difference between good skin health and the development of disease.

What Exactly is a Mole?

Moles can appear anywhere on the skin and are most commonly brown in colour and round in shape. However, each mole is different and can have its own growth pattern, vary in size from small to large and present in other colours like pink, black, tan, or red. Moles can also appear as flat discolorations or be raised and more noticeable.

Although the cause of skin moles is unknown, their make-up is not. Moles are comprised of a collection of cells that doctors call melanocytes. Melanocytes are part of the system that make up skin pigmentation and are present in all areas of the skin. Moles form when these cells cluster together as opposed to spreading out in the layers of skin.

Most common skin moles do not pose any health hazards. At the very least, however, they can become annoying, especially if the location of the mole is on the face or in an area that must be shaved. Some moles, however, can lead to skin cancer. For cancerous moles and unsightly moles, complete removal is the best option.

Although acid can be applied to the mole for easy removal, the most common mole removal method is surgical. Surgical removal can be accomplished by three methods: removal by scalpel, laser removal, and cryosurgery. Surgical removal via a scalpel is when a doctor or dermatologist cuts out the visible layers of the mole with a sharp medical instrument and then finishes the procedure by digging out the deeper areas of the mole.

With laser mole removal, laser pulses are directed at the mole to destroy the affected areas. This method is usually performed in the doctor's office and is less evasive and results in less scarring than scalpel removal.

Cryosurgery is the removal of a mole through freezing. With this procedure liquid nitrogen is applied to the mole to destroy the cells. This procedure is also usually done as outpatient and also results in less scarring.

All of the above methods can be used to remove common moles and moles that signify skin cancer, however cancerous moles may need follow-up treatment with radiation to ensure that a cure is obtained.

The Risk of Skin Cancer

Although most moles do not pose any type of health threat, all moles have the potential to become skin cancer. Certain factors, like sun exposure and type of mole formation, do increase the risk of skin cancer development. Since the potential for developing this disease is always present, it is recommended that everyone with skin moles check their moles regularly for changes.

To make this examination easy the medical profession has developed a system for detecting dangerous changes in moles. This system is referred to as the ABCDs of moles and contains information for spotting skin cancer type changes. When checking a mole look at the Asymmetry, the Border, the Colour and the Diameter.

Asymmetry means that one half of the mole does not match the other half. If you find an asymmetrical mole it may be cause for concern. When examining the border check for irregularity or a lack of smooth definition. You also want to check for blurred borders or changes in borders. Although moles can present in colours other than brown, moles that change colour, contain shades of numerous colours, or that appear tan, red, blue, or white in colour need to be checked out. Finally, the diameter of the mole should be no larger than 6mm in size. Larger moles, or moles that grow larger over time, are more prone to developing into skin cancer.

Moles that meet any of the criteria of the ABCDs should be brought to the attention of a doctor as soon as possible. Skin cancer is completely curable but only if caught in the early stages of development.